I have written on this subject before, but I thought it important enough to offer a flag primer once again.

Kinda like getting a yearly checkup with your doc; it’s always nice to be educated on the important stuff.

The 4th of July is right around the corner and that means lots of folks will be flying Old Glory, maybe for the first time.

For some, the idea of putting up a flag makes them uneasy because they don’t want to unwittingly break any rules.

What better time for a U.S. flag primer?

Ain’t she a beaut? 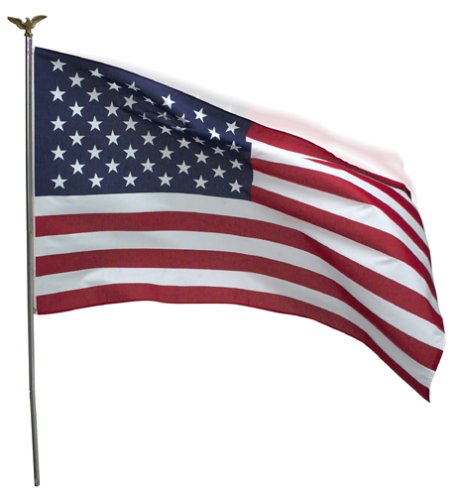 Stick with me and I’ll show you how easy this flag-flying thang is.

Rules and protocol for displaying the flag can be found HERE.

The site lays out Public Law 94-344, also known as the Federal Flag Code.

Here are a few selections from the Code:

(a) It is the universal custom to display the flag only from sunrise to sunset on buildings and on stationary flagstaffs in the open. However, when a patriotic effect is desired, the flag may be displayed twenty-four hours a day if properly illuminated during the hours of darkness.

(c) The flag should not be displayed on days when the weather is inclement, except when an all weather flag is displayed.

SEC. 4. That no disrespect should be shown to the flag the United States of America; the flag should not be dipped to any person or thing. Regimental colors, State flags, and organization or institutional flags are to be dipped as a mark of honor.

(a) The flag should never be displayed with the union down, except as a signal of dire distress in instances of extreme danger to life or property.

(b) The flag should never touch anything beneath it, such as the ground, the floor, water,

(k) The Flag, when it is in such condition that it is no longer a fitting emblem for display, should be destroyed in a dignified way, preferably by burning.

SEC. 6. During rendition of the national anthem when the flag is displayed, all present except those in uniform should stand at attention facing the flag with the right hand over the heart. Men not in uniform should remove their headdress with their right hand and hold it at the left shoulder, the hand being over the heart. Persons in uniform should render the military salute at the first note of the anthem and retain this position until the last note. When the flag is not displayed, those present should face toward the music and act in the same manner they would if the flag were displayed there.

The protocol for home use is brief and easy to understand.

Don’t have a flag?  What are you waiting for?

This is a great activity for the whole family.

Here are a few links to get you started on your flag flying fun:

If you plan on flying the flag 24/7, don’t forget you’ll need some sort of illumination.

I was hoping to find a solar-powered light with great reviews, but didn’t.

Hope this primer resolves any uneasiness you may have had about putting up a flag.

I was a small child during the end of the Vietnam war. I was taught to honor the flag. I took great pride in it. Great parents! Great school! Thank you for sharing this. Laura of Harvest Lane Cottage

Happy to pass along the info. Thanks for coming by!

I appreciate this - my husband is retired from the Air Force and both my sons are Eagle Scouts so the whole treat the flag with respect and fly it right subject rings strong with me. Lovely! Happy 4th

It's a topic that is dear to us as well. Happy 4th to you and yours!

HI, I'm popping in via the Grand Social - Grand reminder for the Grand Old Flag. Have a blessed and SAFE patriotic holiday week! :)

Thank you and you as well!

I grew up as a military brat - it's so nice to see a reminder of flag protocol! We're featuring it our Independence Day Round Up at Reviews, Chews & How-Tos: http://rchreviews.blogspot.com/2014/06/independence-day-diy-round-up.html Thanks so much for sharing!

We can all use a refresher, right? Thanks for including me!

Shannon @ Of The Hearth

Great post! My mom taught us all this as kids, but I don't think many people have been instructed in the Flag Code. I'm so glad you're sharing it!

Thanks. I think military kids/families talk about proper flag flying protocol more than the average joes, but all of us can use a good reminder.