Did the headline make you squinch in recognition?

Did it tick you off a little?

Did you know that if you are feeling invisible there’s something you can do about it? 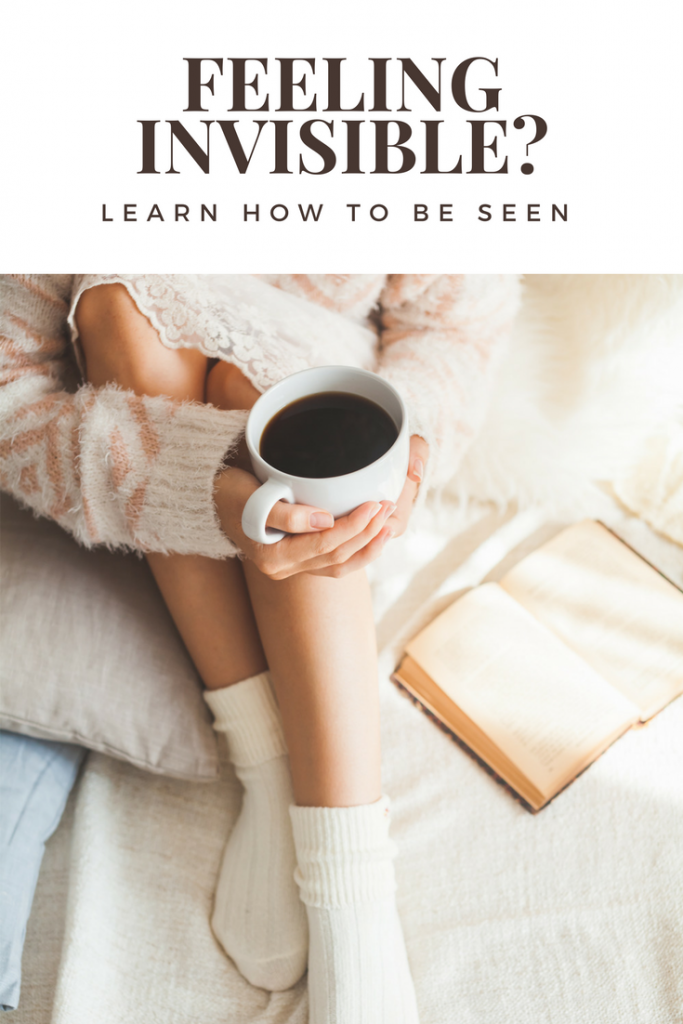 I’m here to help you find your way to visibility.

As I like to describe to folks (as a way to explain my boldness), I grew up surrounded by males. When one’s confidants, friends and competitors are dudes, one quickly learns what is required to get what one wants – you stand up, you look everyone in the eye and you dare them to take what is yours (even if you’re a little scared inside).

Man, how that has served me in life.

When I first heard an older woman express this concern, I honestly didn’t know what the heck she was lamenting.

You feel invisible? To whom? And why? AND WHY?!

I’ve come to understand that many women, as they age, start to feel like they’re living on the outskirts of town – they’re on the outside, looking in and missing all the city fun.

Women feel they are being ignored, left behind, and generally as if no one can see them.

They more I heard the expression – I feel invisible – the more I assumed it was a natural progression of aging in a youth-oriented society.

Yet, as I’ve aged, this phenomenon hasn’t happened to me.

I have a theory.

Women who feel invisible are mostly from the generations of yore, meaning they were taught to be a lady and that good girls don’t misbehave in polite society (they. just. don’t.), no matter the reason. Their instincts to be nice and to get along for the sake of everyone but themselves, has forged their invisibility into super powers.

They want to be seen, but don’t know how.

Invisible women are their own worst enemy.

The wonderful, talented, bright minds that raised many of us are now feeling as if they have nothing left to offer, that the world has left them behind, that no one sees them because they are old and slow and, well, not young.

(put your earmuffs on if offended by naughty language)

The two groups of invisible women.

Group One: Women who are invisible because they no longer want to be visible, or they want to be seen when it’s convenient to them.

Maybe they’re tired of the decline of their understanding of society and the youngsters behind them. Maybe they don’t want to understand them.

I totally get that.

There are days that I want to yell to the world around me: Go to your room! You’re all grounded!

What I’m trying to say, the pointy point I’m walking around, is that many women want to be left the hell alone after a certain age, yet they also want to be acknowledged – on their time – when it suits them.

If you’re gonna be the recluse neighbor who has a nasty mat at the front door, folks will follow your lead and…POOF!…you’re invisible.

Group Two: Women who want to be seen, but lack the skill set.

If you fall into this group, I’ve got great news for you: YOU CAN BE SEEN AGAIN!

Here’s the secret: Stop being invisible.

(man, I should charge for this!)

While I’m kinda kidding, I’m not kidding. Remember when I said I had been raised around guys? Look to them for your societal cues to be seen.

If someone didn’t notice that which needed to be noticed: speak louder.

(not really. don’t do that. at least not in public.)

Well, it’s not gonna be that easy for some of you, because you’ll have to step out of what makes you comfortable, but being visible is worth the discomfort (have a glass of wine afterwards…or ice cream). No lie.

Being invisible is solely a you thing. (I know that seems harsh, but I say it in love.)

If someone is dismissing you, you’re allowing them to dismiss you.

If someone takes you lightly, you’ve taught them they can.

If someone pushes you aside, walks all over you or talks over you, my babies, you need to demand their attention.

Screw being polite for the sake of others. Be visible instead.

As a woman who has never felt invisible, nor doubts she ever will, I can tell you the truth of my life: I will have what I want, no matter what someone else thinks or believes about me.

Am I a Choochie (granny)? YAAASS!

Am I invisible? Never ever.

You are valuable. You are worthy to be seen…if you want to be.

No more lamenting that people have pushed you out. No more feeling awful. You have officially learned how to be seen.

Please drop your invisibility cloak at the door, as you leave.