Don’t leave! I promise this isn’t as weird or creepy as it sounds. 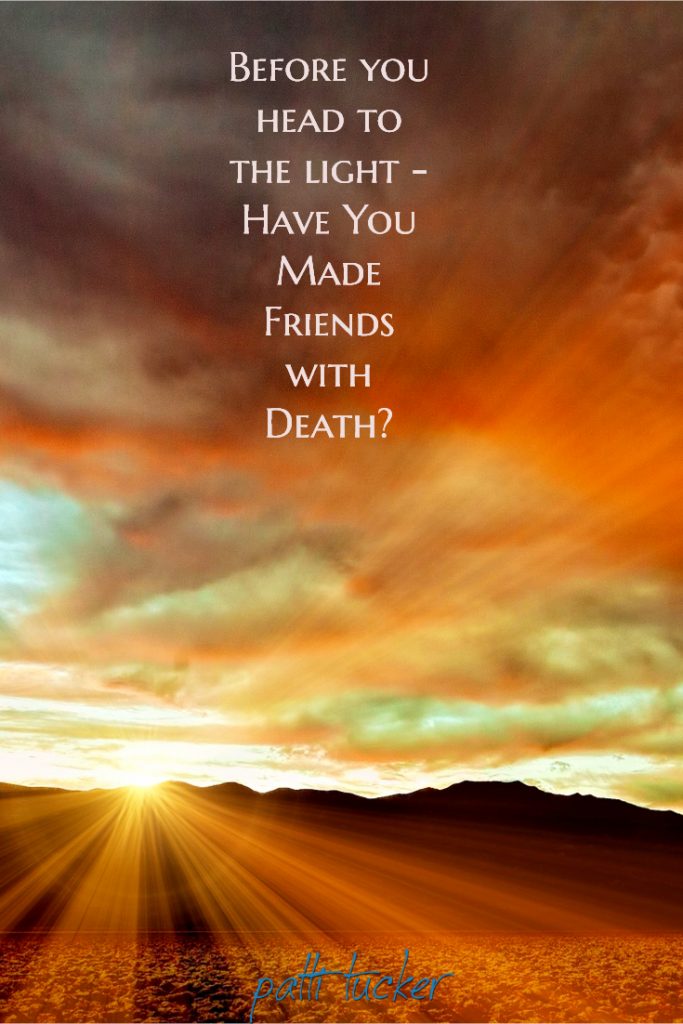 A bit of backstory for any new readers: I’ve cheated death at least three times in my life.* (see bottom of post)

1: As a new and very young driver, I passed over an unmarked railroad track just as a train barreled through the intersection. There were no markers, no train whistle blowing, no indication of the danger I faced. Didn’t help that the view was blocked by dense foliage.

2:  In my 30s, I survived melanoma in an age when the extent of treatment was to cut it out, hoping the doc got every mutant cell, then cross your damned fingers that it wouldn’t kill ya.

3: In my early 50s, I survived an aggressive breast cancer and the brutal treatment that followed (I include the treatment because, honestly – that treatment).

BONUS (it’s official, I am a weirdo): Garry would add the time he had to preform the Heimlich maneuver on me, as I was choking on an apple. So, four times, if you’re persnickety.

What I’ve learned from those experiences.

I’ve learned that death is closer than any of us think; we take for granted that we’re gonna live forever, that our time to slip from here to there is waaay down the line.

If you want to live well – make friends with Death.

Well, maybe not that far.

I know this to be true – the longer you live, the closer to death you are. It’s coming for ever’one someway, somehow.

For me, death isn’t the end. It’s a move into a new home, with all the fancy-pants amenities. Sounds great, right?

Thing is, I like the home I’m in now. I don’t wanna move.

Yet. Death comes for all.

Instead of leading with fear, I suggest you embrace the knowledge that your life is gonna end and use that fact to fuel your life here – now.

Knowing there is an ending and a new beginning is freeing.

Decisions aren’t so weighty and hard-edged.

Plans can change. Mistakes can be patched. Life can be lived well, knowing that your friend Death is gonna show up at some point.

Folks balk when I say “your friend” and I get that.

Many hate the idea of death and the end that it represents, so how could you possibly look at it in a friendly way? How could a shift in perspective help you to live well?

I don’t want to leave any time soon. I love me some living.

Yet, I pray that when it does, I will have lived well.

Today, after cheating death at least three times and deciding to make friends with Death, I can say I have.

* As one who has actually heard these words come from a doc’s mouth, “You may only have 6-months to live.” I can say that I had an instant and surprising regret on how I had lived my life up until that moment.

I had loved deeply – no regrets there.

I had been loved deeply – no regrets there.

I had a loving and supportive family – no regrets there.

I had chased after dreams and experienced deep and abiding friendships – no regrets there.

I had said “no” to the last piece of chocolate cake I had been offered – ALL THE REGRETS there.

I can honestly tell you that the ONE regret in my life had been that I had denied myself the pleasure of that last piece of cake.

Seems trivial, I know, but it obviously went deeper than cake. It spoke to denying myself something simple that made me happy, compounded by the fear that my life – and hopes of more cake – would soon end.

WHAT HAVE YOU DONE, WOMAN?!

Knowing Death is inevitable allows us the expanse to live well now – not just when we think death is close.

I am 85 years old. I have ducked death many times. And I know life isn't forever. I don't believe in an afterlife. I see the enormity of the universe we know , I woder about the possible universes we don't know, and I just cannot imagine a supreme being creating all of this just for us stupid humans. I am ready to meet death, but not as a freind. I will fight that sucker to the very end.

I heard a perfect summation by a doc on a documentary (End Game): Those who are living plan on how to die and those that are dying plan how to live.

I agree with everything you have written. At the age of 67 I have no fears of my death but I do fear the deaths of my loved ones.

It's tough to think of those close to us dying, but, for me, my faith tells me I will see them again. Don't want them to go, but if it happens we'll see each other again. I pray you may have peace.