To avoid criticism say nothing, do nothing, be nothing.  ~ Aristotle

Guess he told us. 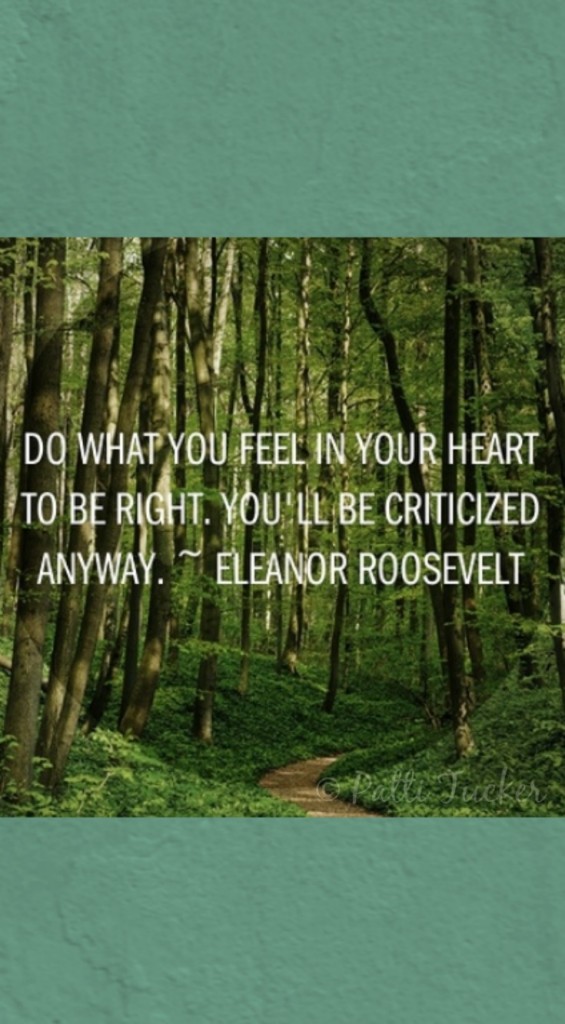 When you’re entrenched in what you’re creating, or trying like hell to create, inevitably critics will come along and tell you exactly what you’re doing wrong.  This applies to business, art or even your family.

Build it and they will criticize.

I have met criticism on every road of my entire life, even as a kid.

* Using words beyond my age: people don’t like that; it makes them feel stupid.

* Holding my own in tackle football with the boys: boys don’t date girls that are good at sports.

* Engaging in heated talk about politics: you’ll scare people with your strong opinions.

* Discovering writing as a tool of communication: you’ll never be as good as your father (he was a writer/journalist).

* Having a child in my early 20’s: you should have waited.

* Writing a novel: most people think they can to write a novel, but they can’t.

* Homeschooling Boy, k-12: good luck finding a college that will take him. (We home schooled in the very early years, when colleges didn’t even have protocols in place for home schooled kids.  Boy got in to every university he applied to, with scholarship.)

* Building a website in hopes of it becoming a place where folks want to visit and share their lives: ~ doubtful silence~  ~small tight smiles~  Why don’t you have a job?

Critics are everywhere.  I can’t, you can’t, escape them.

Critics aren’t always wrong, but they most certainly aren’t nearly as right as they’d like us to think.

If we’re knee deep in our passion, if we’re daring to live a dream, if we’re showing up and inching forward, no matter the money/the fear/the courage/the obstacle, or lack of it, merely doing that which we love serves to piss off some people.

It makes them uncomfortable.  It tips their balance of complacency and order.  How dare you do when they wished you wouldn’t.

Critics are pointing out that they are happiest when everyone colors inside the lines; no thinking independently!   Obviously, I should be listening to mine, as you should listen to yours, right?

Please allow me to channel the late great Whitney Houston: Oh, hell to the no!

I used to tutor kiddos who came to me because they had been told they couldn’t learn a specific subject or that they shouldn’t be in certain classes because they lacked the intelligence for higher learning.  In most cases, each student blossomed once they discovered they didn’t have to take on other people’s expectations of their capabilities.

These students were blown away by the fact that they could not only succeed, but they could claim a new vision for who they were and what they could accomplish once the key of listening to their voice instead of their critic’s was slipped into place, turning their failures into life-changing moments of clarity: screw the critics and find out for yourself.

Well, the screw part was put into age-appropriate language, but the sentiment was the same.

Doing, building, can be exhausting.  There will be days when you question your sanity and your will to keep at it, days when you’re flying high and loving every figurative brick you’re laying, and days when someone comes along and attempts to crush you with their biting opinion.

Listen to them; listen to your critics.

No really.  Listen to them.

And then, understanding that their words have nothing to do with you, but everything to do with their insecurities and fears, show them how it’s done, as you go about your business of building.

Great spirits have always found violent opposition from mediocrities. The latter cannot understand it when a man does not thoughtlessly submit to hereditary prejudices but honestly and courageously uses his intelligence and fulfills the duty to express the results of his thoughts in clear form.  ~ Albert Einstein

~If this post resonates with you, please consider sharing on your favorite social media, or with someone you lurv. Smooches!~

Accepting criticism (it's not really about you) | Coffee, Wine, Bitch

[…] I read a post by a fellow blogger called, “Listen to Your Critics.” You have to read this article, because it’s […]

"Building a website in hopes of it becoming a place where folks want to visit and share their lives: ~ doubtful silence~ ~small tight smiles~ Why don’t you have a job?"

That one REALLY hit home. It's a question I receive frequently (even though I've begun monetizing my blog...I've found that a lot of people don't understand what that means). I've gotten so fed up with it that my answer is usually something along the lines of, "That's not really your business." I've never asked anyone for help paying my bills (because I don't need it) and I'm not collecting unemployment, so I don't see how it should be anyone else's concern. Whether or not I have a job is between my husband and myself. People are too nosy for their own damn good.

LOL! Mind yo business! Love it. I think that folks mostly come from a good place, but you're right, what you do is your deal and no one needs to be happy about it other than you and your husband.

Here's to blowing the doors off the Internets and creating a kick-ass virtual place to hang out!

Thank you so much for posting this. When I sit down to write I am really opening a vein and exposing myself. I have had those criticisms although gentle, it has an effect. So I have to keep in mind it is about them instead of me. Lucky for me I have had generous support from fellow bloggers and only one "meangirl", which I blocked, so I feel fortunate. I ask myself what if I don't continue, then what? So I continue and enjoy all of you.

One funny thing about it all, when I tell people I blog they say, "politics"? I say no, cookies. They seem confused.

I used to blog politics and now sweet grandbaby things. Not confusing, just following the passion! Thanks for the thoughts. I always love to hear what you guys think.

Patti, I really enjoyed reading this. And then I read it again. I read parts of it a third time. Thank you for sharing it at Treasure Box Tuesday. ♥

Wow, that's so nice to read. Thank you.

I am also reminded of that poem by Blessed Mother Teresa, "Do It Anyway." The last line is: "In the final analysis it is between you and God. It was never between you and them anyway." I am impressed with your home school success! I see results of that kind everywhere - spelling bee, science fair and scholarship winners. I don't regret sending my kids to our excellent district public schools, but I wish there had been an option to cover some of the material at home..."part time home schooling" would have suited me very well!

I love that line of Mother Teresa's. Oooo, part time home schooling. I knew some folks that did that!