If you were allowed one parenting do-over, what would you use it on? Or shall we never speak of that which shames us? 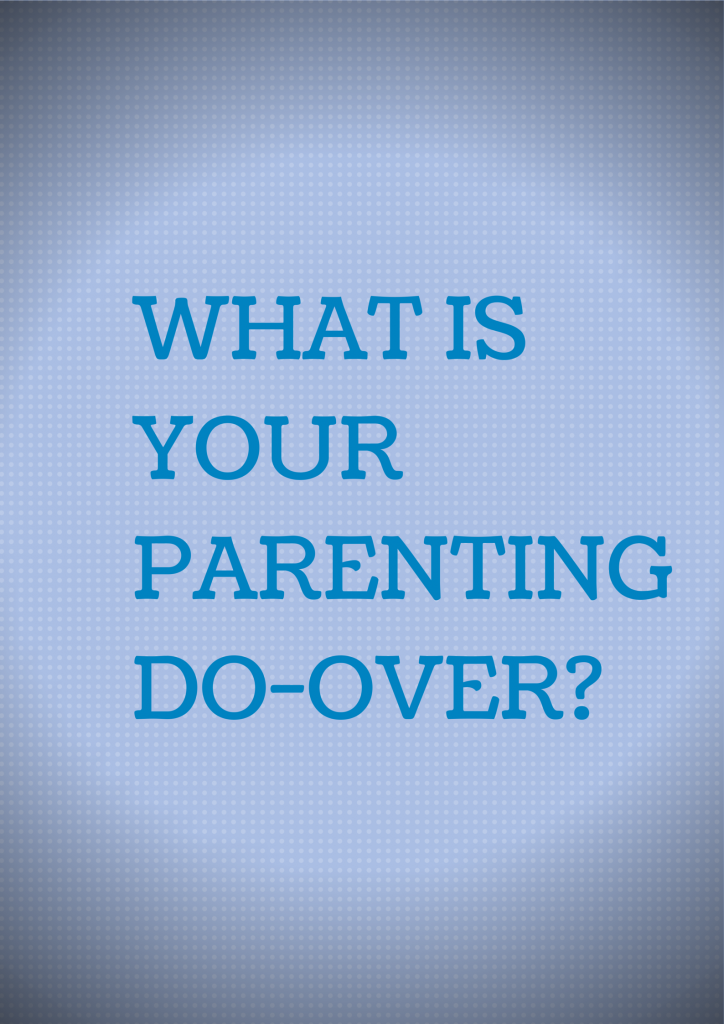 So, what would be my parenting do-over?

Let me start here:  Boy was an only.  I married the love of my life and in a hot minute we were pregnant.  We weren’t supposed to be able to have biological children and had made plans to adopt.  It was all very how did that happen?  SURPRISE!  Because we always considered Boy to be our miracle baby (there were more pregnancies, yet no more babies), I felt protective of the gift.  Fine, overprotective at moments.

He was a much loved kiddo, but the poor thing couldn’t catch a break from our focused gaze.  Not only was he an only, he was a homeschooled only, so I knew where he was and what he was doing for pretty much his entire childhood.

Not that he didn’t have friends or went on sleepovers or had a life other than school.  He did!  But, when one runs with a pack for most of the day while in school, some things delightfully slide under the radar.  For Boy, it was harder.

That’s my do-over: I wish I had let more things slide.

Looking back, I see where I could have been more relaxed.  Yet, in the heat of parenting everything seemed so big, so important, so do-or-die.

Parenting, when done competently, is the hardest job anyone will ever attempt in their lives. Being responsible for shaping and guiding another human-being is overwhelming at both ends of the emotional spectrum.  It’s physically daunting.  It’s mind-blowing.  It’s a hard look at every thought you ever held as truth.  And I’m saying now, given the intensity of wanting to get it right, I could have loosened the MOMMY’S GOT YOU! grip.

What about you?  Want a parent do-over?

I don't have any do-overs to ask for yet, as my first is just 11 weeks old, but I wanted to post because I was an only, too. We all survive our parents, and while you may remember times when you were too hard on him, or a little too strict, or whatever, I can assure you, he more than likely hardly remembers them. I'm 25 now and I only remember the times we butted heads when I was a teenager, but most of that is because I was a teenager. You did good, mama!

11 weeks old! Enjoy these early days...heck, you'll enjoy them all. Thank you for such a kind comment. Husband and I come from large families, so we always wished Boy had known that life, but it wasn't to be. I'd have to say that along with the drawbacks of being an only there are also some great advantages, so it works out. Now we're on to our grandbaby, Sweet E. So many years (God-willing) of joy to come!

Oh I think I'm still new into this mommy thing to worry about a do-over... my son is only going on 4, there has not been enough time for me to figure out what I could have done differently! Either that or I'm just too sleepy to actually think of anything today! =)

Thank you for spreading JOY and sharing at the Oh What a HAPPY Day party.

4-years old is a great age! Thanks for coming by.

Parrish (Life With The Crust Cut Off)

This is awesome!!! We would love it if you would link up at our linky party, Live every Wednesday to Sunday.

We hope to see you there!

Thanks! I'll pop over.

Hi! I am visiting from the Moonlight and Mason Jars link party. I completely understand what you are saying! I have two boys - one five and one three. We were soooooooo much harder on the first one then the second. I used to think if I really stood firm on an issue the first time it happened, we would nip it in the bud right then and there. We actually had a one hour stand off with him as a toddler because we told him he had to try corn with his dinner and he wouldn't. He finally ate it and then gagged it up, lol. Now I know you just put veggies down every day and then they start to eat them. Or I just puree them and stick them in things and avoid the fight all together. Like spinach smoothies!

But already I would do over the past three years with my five year old if I could. I would have less battles over little things and I would've just hugged him more as he adjusted to having a new brother. It seemed like he was so much older and should know better, and now I know he was just little.

This may be my favorite comment of the week. It's so filled with wisdom and love and Mommy YES! Thank you for coming here and sharing. What a wonderful gift you have given a new mom who might be struggling and feeling awful. Seriously, I can't thank you enough. (i'm sure your first born will survive you...mine did!)