I can’t believe that we’re already up to nine posts on the subject of how Perimenopause Can Suck It. This series started innocently enough with Post #1 and here we are, eight more later.  Just so you know, it’s not over yet.  I still have a few more informative (horrifying?!) posts to bring you up to speed on the amazing miracle that is a woman’s perimenopausal body.  Every dude I know just shuddered. 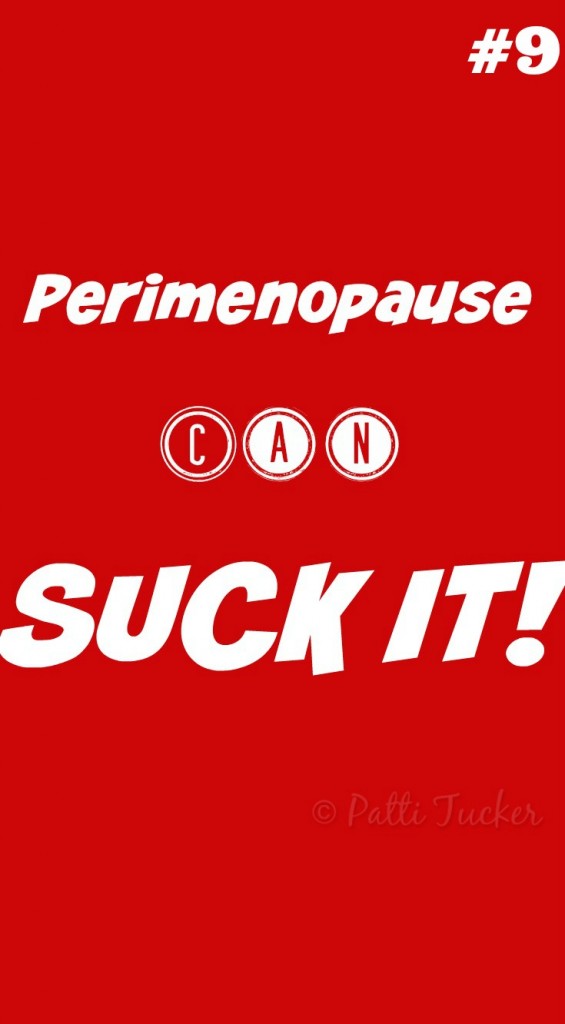 Sounds like a bad B-movie.  Can’t you picture it?  It’s a dark and stormy night…an unsuspecting, regularly ovulating, woman, suddenly starts down a dark and unfamiliar path, exhibiting strange and powerful symptoms of the change of life only to temporarily forget almost everything she’s ever known.  A scream in the darkness: WHAT IS HAPPENING?!  ~cue foreboding music, an uncontrollable need to slap the stupid out of people, and possible hormone patches~

What the holy hell is brain fog?

Brain fog is simply short-term memory loss that can have its roots in many causes.  Lack of sleep, hormonal changes and stress can all impact this disturbing symptom of perimenopause.

When I first started experiencing brain fog, Garry would note that I seemed “scattered.”  He said I wasn’t finishing sentences or that I seemed to just walk off.  I would brush it off by saying I had a million things on my mind, then promptly forget about it.  The first time he pointed it out to me, we were shopping and I said, “But, I didn’t run into anything!”  Ha!  Showed him!  Right?

When he mentioned it again, I asked for specifics that he could point to as proof for his ridiculous claim.  It wasn’t one thing in particular or anything obvious, like crushing fatigue, that he could cite.  It was more a feeling of being brushed off that he kept noticing.  While I tried to defend myself, I felt I would never purposefully ignore his concerns, I also tried seeing it from his POV.  Brain fog is tricky in the fact that it can come off as not paying attention or being fuzzy in thought or word because you plain forget about things, only to remember later, which then you’ll probably forget again.

It takes the appearance of what my grandmother used to call ‘flighty” behavior.

It wasn’t until I was out on a run and thinking about his complaint that I realized that the scatteredness he was observing was a perimenopausal symptom of brain fog.  THANK GOODNESS!  I would hate to think that not running into things was my new bar of achievement.

When Does a Foggy Brain Occur?

Lifeclimax.com offers this: “A foggy brain is found to establish itself at different phases of the reproductive life of a middle-aged woman. The stage at which the symptoms show up and the severity of symptoms differ from woman to woman…Women report high cognitive disturbances in the late perimenopause when compared to the early phase. These symptoms further get worse after menopause and improve in the late postmenopausal phase.”

Anyone else have an Oh, Shit! moment?  Man, I thought this was gonna be an easy and quick symptom.  Doesn’t look that way, does it?  The article goes on to say the first year post-menopausal is the worst.  STOP IT!

[Tweet “Perimenopause Can Suck It #9: The Dreaded Brain Fog. What? What did you say?”]

Important Note: if you have a natural transition into menopause, your symptoms will be gradual, but if you have surgery-induced menopause, hang on, baby, because it’s pretty much a tougher transition.

More Important Note: Brain fog is temporary.  HUZZAH!  Finally, something we can hang on to as we slide on skinned knees to the other side.  Hang on!  We’ll all get there and then how we’ll laugh!  Remember that time…no?…okay, nevermind.

Your declining estrogen hormone, lack of sleep based on your skewed hormonal balance, possible medical issues (malfunctioning thyroid) based on your whacked out hormones, and stress bases on all the a fore mentioned.  See a pattern? Waning estrogen is key in brain fog.

What Can You Do For Brain Fog?

* Up the nutritional value of your diet.  Super boost the fuel you’re putting in your perimenopausal-ravaged body (some say supplement with omega 3s, but that’s your call. personally, I don’t) and boost concentration and overall well-being.  I find when I overdo on less nutritious foods, I have trouble concentrating, yet when I’m hyper-aware of my diet and take care to eat my vitamins, I’m much less scattered.

* Get moving.  Y’all know I’m a runner.  When I’m injured and can’t run, it’s not only hard for my physically, but mentally I’m not as sharp.  When I’m not able to run, I bike, lift weights or walk.  The point is to get your body sweaty and your breathing heavy (winkitty wink…that works too).  More movement = better brain flow to the brain = better concentrating and memory mad skilz.

* Check in with your doc.  Can’t hurt to be evaluated and to discuss your options.

While I’m fascinated about the changes occurring in my body and my resilience throughout, perimenopause has overstayed its visit.  I’m ready for this bad guest to pack up and leave me (and Garry!) in peace.

I’ve accepted what is happening to my body; it’s out of my control.  The very best we can do in this situation is to arm ourselves with as much knowledge as possible to meet our needs, so we can figure out a plan of action….even if we’ll just forget about making such a plan in 3…2…

Oh, my babies, perimenopause can suck it!

~If you can remember what this post is about, please consider sharing on social media. Smooches!~

[…] familiar with the Perimenopause Can Suck It series, but check this out for those on the other […]

Perimenopause Can Suck It #12: Is This The New Me?

[…] When I first found this recipe, I immediately printed it out.  Then, I promptly forgot about it. I blame my peri-brain fog. […]

First of all ,thank you for staying opene to keeping on sharing. Second, I should've known Jo_mama....you are a newbie and kuddos to you for getting into blogs like this before the eye of sthe storm hits you (or it might not hit you at all!), I whish I would've been that smart, but I digress. I don't endoerse or sell or am affliated with anyhthing, I'm just your regular joe schmoe, HOWEVER, I can recommed a book that has saved my life many times over.."Female Brain Gone Insane" by Mia Lundin. I hope Mrs. Tucker is ok with me posting this. Read it if you can, it is not the ultimate authority on perimeno, but it is way up there. I treated myself with the authorherself for a while and she worked miracles on me, sadly my money ran out for that and bills took precedence. To your comment of: "(Aside from “chemically cooling off” that is, just for seriousness-sake!)" for seriousness sake let me put it out there that you like many others might've thought about booze or street drugs when I said that,that is where most people's minds go to (I don't do them, not that there is anything wrong with it if that is your thing) the chemical cooling off refers to prespcritions sedatives for when I feel explosive highly suggesed and prescribed by one of your so called doctors (an and very well known doctor nation wide at that, which by the way , it took him YEARS to convince me to take it, until I conceded when I felt I was coming out of my skin with anxiety,which by the way is another nice little symptom brough on by your friendly perimenopasue. The ups and down in Estrogen, causes Cortisol to go out of wack also, and guess what anxiety is A HUGE, SUDDEN RELEASE OF CORTISOL directly into your blood stream.). So! if we are able to set aside any judgment and take what we like and leave the rest, I will be thrilled to share what has helped me to make it to this point so far. At 37, and based on your comments, you have just started to deep in your toes into the "SWAMP THING", hold on to your britches, because if it gets you like it has me....may the Universe have mercy on your soul. Right off the bat the first thing that comes to mind are the following : ALCOHOL , SUGAR, COFFEE, DRUGS AND NICOTINE will put you over the edge...guaranteed, (this goes whithout saying , but I still wiil say it THIS IS MY EXPERIENCE, I AM NOT A SCIENTIST, and only share from my experince. You have time to prepare for this, at 37 I was happy, jouys and free, not a care in the worl and then BAM! the ovaries grand finally started raping me from the inside out once a month, every month until today....but If I can help you or anyone, even if just with words, then maybe this shit,-tornado,- hurricane,- tsunamy,-earthquake- APOCALYPTIC- CONCENTRATION- CAMP, happened for a reason. If you can look into megadosin with powdered Vitamin C, IT IS A MIRACLE!!! OF A VITAMIN,it will do so much to get you ready and carry you thorugh ( I just discovered it and my overall moods and physical ailments have come down to a manageable level (it has been only a month). No regular practicioner will support this, IT IS NOT PROFITABLE!.Having said all of that your body has an inner wisdom, it truly does, so PLEASE, start educating yourself about it and even though you have a team of "doctors" on your side, that you trust (that is hugely awesome) your body wisdom belongs to you, arm yourself with knowledge and not a the mercy of what others think is best for you...follow you gut....you will be fine, but like an over 50 lady told me long time ago "if is FABULOUS on the other side of 50, but there is work involved, being proactive and there is some putting up with it that goes a looooooong way" Namaste sister in menopause I bow to you See? it is 10:35 pm and just by sharing here ,all my pisiosity has gone bye, bye...until next month that is....oh! one more thing, I would've never believed a woman could go through this crap , had it not be happening to me. It sound crazy,it feels crazy and it looks crazy! just FYI...in addition, as you can see I am a writter, as the hormones dwindle, you course of action will change, THERE IS NO MAGIC PILL! Support groups have helped me TREMENDOUSLY.

By the way, you're absolutely right about one thing- doctors are OFTEN guessing about what might help! I am the first to question EVERYTHING a doc says (most especially the doc I am married to). I guess I am fortunate to have a primary care doc, an OB/GYN and psychiatrist on my side that I trust and have been seeing for years now that can help me be proactive, they work well together, and with a fairly educated guess, haven't led me astray just yet....