Dear Sweet E, you’re still such a small whippersnapper that I have no idea if you’ve inherited my proclivity for plain talk.  This post will serve you well, if you have.

“You’re one of the most honest people I know.”

That statement, made by others about me, to me, is a familiar refrain.  The first time I heard it, I was honored to know what others might think of me, but over the years, I’ve come to understand that for the most part, but not always, when this nugget of wisdom is offered to me, it’s not a compliment.  Not by a long shot.

The backstory to being told about how honest folks think I am is usually offered when I am either #1: recounting a situation that I was involved in, or #2: giving my opinion when asked.

When asked, is the key here.

I don’t believe myself to be a scorched earth, truth-tellin’ at all costs, kinda gal.  Nope.  I’ve lived long enough to know that when I need to speak up, I do.  When I don’t, unless pointedly asked, I don’t.  Even then, when asked, I try my darnedest to couch my truth in love.  There’s no sense in tearing people down for the sake of truth, unless it’s absolutely necessary.  I want my truth to edify.  Pretty damn simple if you ask me. 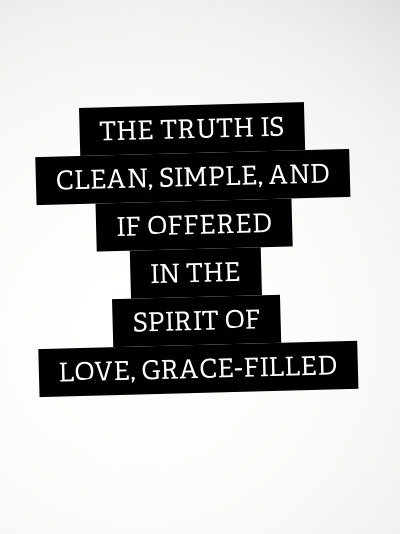 Yet, folks have taken issue with my words my entire life.

Honesty comes with a price, there is no doubt about that truth.

Knowing this, when someone calls on you for your opinion, should you give it?

If the one asking is shocked or horrified by the truth as you tell it, they’ll think twice before asking you next time.  The upshot for you is that you were asked and you offered your truth, instead of hem-hawing around thangs.  Ain’t no messiness with the truth.  Ain’t no trying to remember what you said or how you said it.  The truth is clean, simple, and if offered in the spirit of love, grace-filled.  Whether or not folks can grasp that at the time of your offering or not, has nothing to do with you.

In this pop culture world of reality everything, the truth is a novelty.  Some rail against true reality and opt for what they wish could be rather than what actually is.  I’ve never understood folks who live their lives in this manner, but baby, you’ll need to understand that if you offer a truth to one of those people, they will attempt to rip you to shreds as they defend the falsehoods they hold close.

I’ve often thought that as one who speaks plainly, it would be easier to follow the crowd than to have to defend what I know to be true.  A gal grows weary, you know?  A go-along-to-get-along kinda thang would offer me relief from the eye-rolls and tsk-tsking. Yet, with each new year that slips behind me, I’ve come to realize the truth is where it’s at.  Eventually, it wins out and what better place to be standing than hand in hand with what I know to be true?

Long ago I made peace with the fact that some will not, under any circumstances, accept the truth at hand.  I had to decide if I was good with standing firm and losing a few folks in my life, or if I valued ambivalence more.

I think you know where I took up my position.

Truth is, there have been times that telling the truth has been devastating to me and to those I had to tell.  I had to muster a bravery I didn’t think I possessed.  I had to prepare my heart for unspeakable loss at the telling.  I had to endure a pain of heart so deep, I felt it physically.  For some of those moments, I still bear the scars.

Yet, I offered, gave, pleaded my truth anyway; I calculated the cost and knew it was worth the payment.

[Tweet “Honesty comes with a price, there is no doubt about that truth.”]

I have no regrets.  The truth will set you free, my sweet little man.  Don’t let anyone convince you otherwise.

For anyone who is getting their hackles up, preparing their statements for a rebuttal, thinking the truth is too hard for a child, I ask you: how have you felt when you discovered you had been on the lying end of easy words, no matter what your age?

That’s what a lie will do to your soul and the soul you hand it to: it’s nothing less than the destruction of trust.

Today, when someone tells me, “You’re one of the most honest people I know…” I know a head-thumping is about to happen.  I know their observation most likely won’t spin positive.  It’s a shame really, but I understand their fear.

The interesting thing for me is that I never set out to be “one of the most honest people” folks know.  I simply wanted to live my life with an ethos of kindness and sincerity and a general longing for the best of all.  Being honest seemed to fit that ethos.

With all of this being said, I have been dishonest in my life.  The consequence has always been far greater than if I had simply had the courage to tell the truth and take my lumps.  I discovered early on that while telling the truth could and would get me into trouble, it was far worse to compound the situation with a lie/lies.  Plus, I’m really awful at lying.  I don’t even have a decent poker face.  I get all twitching and giggly; it’s a sight to behold.

Sweet E, maybe you got my plain-talking manner, maybe not.  Either way, have the courage to tell the truth, baby.  Have courage.

Choochie loves you, baby. That’s a truth you can count on.  Always and forever.

I love how you associated being honest with being grace-filled. Great read!

Thank you. If I didn't have that grace I don't know if I'd have the strength to tell the truth when it's easier to let things slip.

Now I'm interested in the specifics of some of the situations you sneakily alluded to! It's hard to walk the line between wanting your words to be positive/uplifting, and not wanting to cause offense, and still speaking up about an unpopular opinion you feel very strongly about. Good food for thought.

You are right, there is a fine line between the truth and not wanting to offend with a hard truth. To tell the truth can be a hard thing to do.

What a beautifully written post, Patti. I could go into details about why it spoke to me, but I probably shouldn't. I'm so thankful that my husband values honesty above all else in our relationship, and we're continuing that with our girls. I want them to know that lying to cover up a scary truth is ten times worse than just getting it over with.

This part really got me: "Truth is, there have been times that telling the truth has been devastating to me and to those I had to tell. I had to muster a bravery I didn’t think I possessed. I had to prepare my heart for unspeakable loss at the telling. I had to endure a pain of heart so deep, I felt it physically. For some of those moments, I still bear the scars."

Thank you for the lovely response, Melissa. When I write so openly, as with the Sweet E posts, I feel vulnerable, yet hope it resonates with others. SO nice to read.

What a great piece! Also a great idea to write for your little one for later on. Thank you for sharing!

Thank you. I have loved writing this series and hope that Sweet E will read them one day.

Another beautiful essay. Thanks so much Patti. Donna

Thank you. You guys humble me.