Have you ever thought about your unintentional imprint on this world?  You know, the pieces of you that make an impression on others when you’re not even thinking about it?

Life is surprising and twisty; you never know what’s just around the next bend. It’s the element of surprise that’s my favorite part.  Unintentional imprints are just that: surprises.

Something extraordinary and profoundly humbling happened to me on one of my runs last year that fills that description.

There I was chugging up a hill and I noticed a guy on the opposite side of the street, walking up the same hill (I will refrain from my usual diatribe about being on the correct side of the street when one is out walking or running). He looked like a walker, lumbering and even-stepping along. Given the cooler temps, he was also dressed more warmly than a runner, so I assumed “walker.”

When I got within a house or two of him, he took off running. (IMPORTANT NOTE: OMT! is a competitive gal by nature.) My first instinct was to race the dude up the hill. Didn’t matter he had no clue we were racing: I KNEW!

I lengthened my stride and closed the gap between us. I assumed, given his height/weight ratio and his overdressing, that he’d never make it up the hill before I did. I was counting on him running out of steam.

Just as I caught him, but before my imaginary finish line of the stop sign, he stopped and looked over at me. HE KNEW WE WERE RACING! It gave me a good laugh.

I decided to go with it and hollered across the street to a stranger I had never seen before: Are we racing? Wanna race to the corner?

It was his turn to laugh. Yeah. 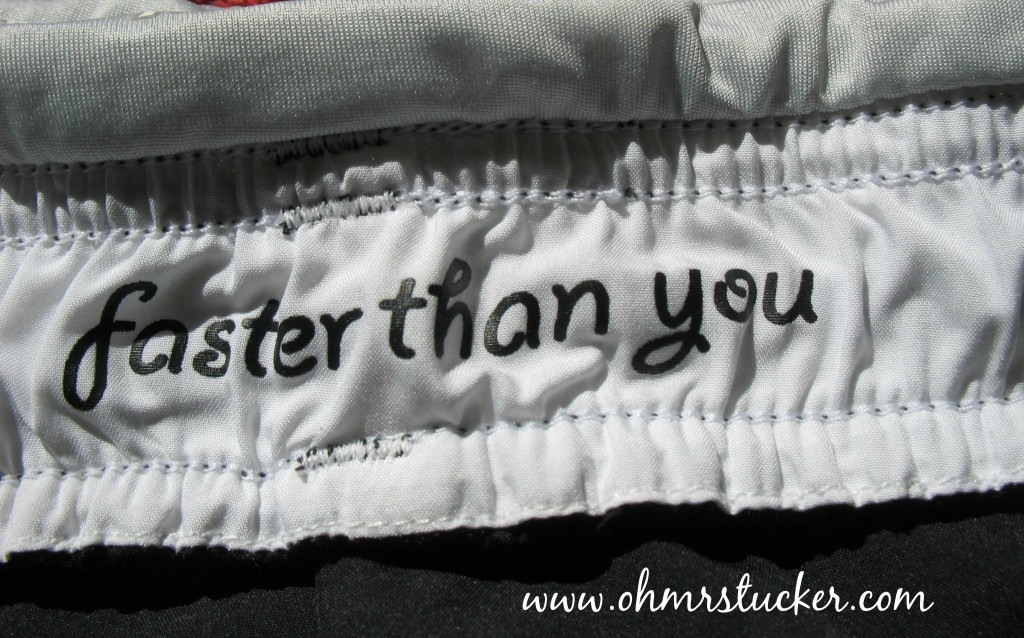 He was obviously flush with fast-twitch muscles as he pulled ahead. My poor slow-twitchers were no match for him, so I did what only a girl can get away with: I pretend-cried to distract him.

Do you really need to beat a little gurl you just met on the street? COME ON!

I actually didn’t need the questionable tactic; I went on to beat him as his fast-twitch muscles did what they’re born to do – give out quickly – leaving me to win the race with endurance rather than speed.

Other than a nonsensical whatwhoawhaaaa?, accompanied by my best surprised Scooby-Do face (ruuu?!), I was speechless.

At the stop sign, we waved our goodbyes. I kept running, he returned to a walk, and we didn’t see each other again. Matter of fact, as I’ve searched my memory, I had never seen him before, but he had obviously seen me.

Typically, I run in my head. I run and greet other runners and walkers. I run and pray. I run and turn problems over in hopes of finding solutions. I run while paying attention. I run and HOLLA! at the training fighter pilots overhead and the kiddies on the school playground. I run and challenge people and garbage trucks to races in my head.

But there it is.

Our imprint on others around us, seen or unseen, happens whether we are aware or not, whether we intentionally give it or not.  It’s the rare gift when we get a glimpse of that impression. As a gal running along in life, minding her own beeswax, it was a great and good gift to know that I had a part in this guy tying up his shoes and hitting the streets.

You just never know when what you are doing or saying will move another, do you?  I am humbled, still.

Now, who wants to race?

[…] in the form of a compliment, of my effect on this world.  While I’ve talked about your unintentional imprint before, this goes a bit […]

Thank you for this! It is inspiring and humbling at the same time!

Thank you, so much.

I have actually thought about that. Thanks!

Can we do beer olympics instead? I don't run...but I'm competitive.

OMG lady we need to hang out, it would be non-stop competitions and it would be epic! I've never thought about it much, but it's a very interesting thought and I agree it would be very humbling to have someone say "you're the reason I'm doing something good". Love this! It gives me more validation to keep doing what I am doing and hope that someone it affected by it.

Haha! I love the idea of us having unending competitions. It really was an amazing moment to hear a stranger tell me I was the reason he was out there. KEEP GOING!